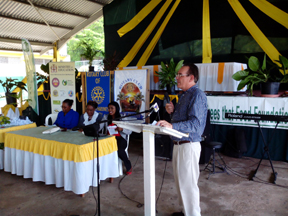 Trees That Feed Foundation isexcited to announce the launch of our school-feeding program, Trees That Feed in Schools, an initiative built in partnership with the Jamaican Government and Rotary!

The program kicked off last Friday at Ocho Rios High School in Jamaica.Thousands of breadfruit trees will be distributed to schools islandwide over the coming months to help fight hunger and boost feeding programs for students.

“Planting trees is healthy for the environment and is a positive contribution to future generations. In addition, the planting of breadfruit trees, in particular, has the benefit of increasing food supplies for the Jamaican population while promoting national food security,” he noted.

Posted in Blog, Breadfruit, Jamaica | Leave a comment | Back to top 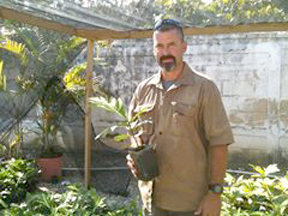 August 27th, 2014. Eric Helgemo is not only a crucial partner of Trees That Feed Foundation’s, but also a true hero of ours. Eric is the President of Three Angels Children’s Relief, a non-profit organization working to help orphans and at-risk families in Haiti by providing both education and care.

Eric grew up in California and has had many careers, including construction worker and sheriff. He fell in love with Christine, and when they married, Eric joined his father-in-law’s nursery business.He became a master nurseryman and managed one of the largest nurseries in California.

When TTFF held its first meeting to discuss expanding into Haiti, Eric flew in to join us in Illinois. This superhero is a man of action! His resourcefulness and resolve are an inspiration. In 2009, Eric had volunteered to fly to Haiti to deliver Christmas gifts that his church had collected for the children of Three Angels. While there, he was concerned that they had no disaster preparation, so he created a plan and conducted drills with the children to teach them what to do in an emergency. When the earthquake hit Haiti only a few weeks later on January 12, 2010, these children were prepared. Although much of their building collapsed, all of the children were safe.

In November 2011, Eric, Christine, and their three children moved to Haiti for a three-month stay to oversee some projects. They ended up staying, initially with a two-year commitment, and are currently homeowners still working tirelessly to improve lives and land in Haiti.

Eric and his team at Three Angels have a three-acre plot in Port au Prince that was fallow (plowed and harrowed, but left unsown for a period in order to restore its fertility as part of a crop rotation). Once he heard about our work, he encouraged Three Angels to convert this property into a farm and plant nursery. TTFF provides the young trees, and Eric and his team grow the plants until they are robust enough to be distributed. We work together to provide trees to highest need communities in Haiti.

A problem-solver with a huge heart, Eric Helgemo is our hero. Thank you, Eric!

Posted in Blog, Haiti, Heroes | Leave a comment | Back to top

Below is a map of breadfruit plantations in Jamaica visited by the research team.Click on any dot to learn more about farmers and processors who are caring for TTFF breadfruit trees. This map will grow to be a tool to help support farmers and develop markets. Based on the team’s work, breadfruit continues to prove itself in being a valuable supplement to food production in Jamaica. Recommendations from the conclusion of the project include increasing the formation of co-operatives to bring critical mass to breadfruit production. Interestingly, the team found the highest breadfruit tree survival rates among organic farming methods!

We are looking forward to Randi and Afia’s presentation about this TTFF project atColumbia University’s 2014 International Conference on Sustainable Development Practice in New York City on September 17th. Thanks again, Randi and Afia, for all that you have done to help propel TTFF’s mission! 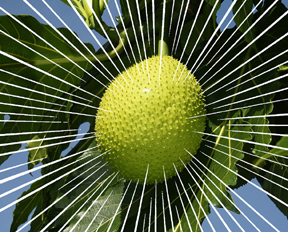 We love Good Magazine’s recent article about breadfruit, “Can a Miracle Fruit Overcome its Unsavory Reputation?” by Mark Hay.

While the TTFF network will most likely agree that breadfruit’s reputation is anything but unsavory (especially if you have sampled Mary McLaughlin’s cooking!), we are happy to see breadfruit’s incredible benefits continuously recognized throughout the media:“…It’s a high-energy food, loaded with calcium, fiber, up to 10 times the potassium of a banana, and many more nutrients.”

Breadfruit is also increasingly on the radar of global entrepreneurs. Good highlights this aspect of the breadfruit market as well, noting that entrepreneurs realize that “…the fruit is healthier, and uses less land than wheat and other cereal grains. By drying and milling breadfruit into flour, which both lasts for years and lacks gluten, producers could preserve the quick-spoiling fruit, allowing them to save whole crops and tap into the gluten-free market (which doubled between 2008 and 2012).”

Check out the rest of the article here. 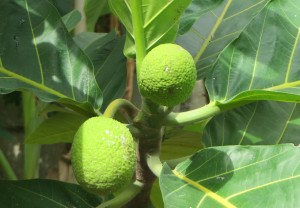 July 1st, 2014. According to the Huffington Post, “Watch out folks, there’s a new wonder food in town, and it promises to make a big difference to the world.”

Breadfruit has picked up a lot of media traction this week, and it is being touted as a new wonder food that has the potential to feed the world. Here at Trees That Feed Foundation, we couldn’t be more excited to be reading this! While we know that breadfruit itself isn’t new, the global pick-up of the idea that it can be used to help alleviate world hunger is fantastic news and indicates new growth in potential of breadfruit. No one should perish from hunger when a $15 breadfruit tree can feed a family for a lifetime.

More and more people around the world are talking about breadfruit as a key ingredient for the solution in addressing hunger and providing food for those who need it most. Join the conversation and check out this week’s media pieces about breadfruit, the coolest new global super-hero, below:

Breadfruit: The Wonder Food Packed With Carbs and Protein That Could Feed the World – Huffington Post

Is this the new wonder food? Breadfruit is high in protein and has the potential to feed the world, experts say – Daily Mail

Back to School with Breadfruit 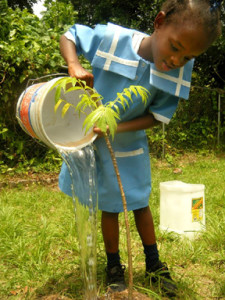 July 21st, 2014. Although we are still in July, the next school year will be here before we know it! With the start of the new academic year around the corner, TTFF continues to focus on providing sustainable food sources to communities and children who need them most.

We are particularly excited about this school year, as TTFF has partnered withJamaica’s Ministry of Education andRotary to plant breadfruit trees in all of Jamaica’s 3,000 schools. Planning for this initiative commenced last year, and after much hard work, the program will officially launch in September. Stay tuned for updates surrounding the launch!

Posted in Blog, Breadfruit, Jamaica | Leave a comment | Back to top 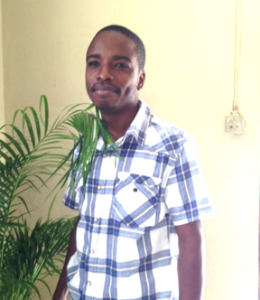 July 24th, 2014. From students to CEOs, TTFF works with amazing individuals around the world to alleviate hunger, create jobs and improve the environment. These individuals are our heroes; those admired for noble qualities and regarded as models for others. This certainly describes our hero, Zavier Gray! Through his role as Farm Manager at Orange River Research Station, and his personal dedication to improving our planet, Zavier spends endless hours ensuring TTFF trees receive the best care possible. He goes above and beyond the call of duty on a daily basis, and his dedication is an inspiration to us all.

Zavier grew up in the parish of St. Mary, Jamaica. His father was a farmer and also worked as a driver for the Ministry of Agriculture. Zavier completed his studies at the Jamaican College of Agriculture, Science and Education. Today, he has a beautiful family of his own, including seven year-old daughter Zahra.

Since 2000, Zavier has been Farm Manager at the Ministry of Agriculture and Fisheries’ renowned Orange River Research Station, a 327-acre crop research station specializing in tree crops. Orange River is the hub of most agriculture research in Jamaica. Here, new varieties of plants, including the Ma’afala breadfruit tree, are tested before distribution to Jamaican farmers. The Jamaican government works in partnership with TTFF to grow young trees to a robust size, increasing the trees’ chances for survival, before distributing them to smallholder farms and community members.

A true hero to TTFF, Zavier wears many hats to help us achieve our mission. He collects TTFF trees at the airport, grows them with care, helps facilitate the distribution process and provides training in the best agricultural methods for successfully growing trees. Host to our February 2014 Breadfruit Summit at Orange River Station, Zavier is the face of what makes our mission successful. Thank you, Zavier!

Posted in Blog, Heroes, Jamaica | Leave a comment | Back to top 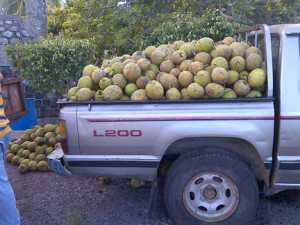 Feeding Development, hosted by Devex,recently posted an article that poses the question of whether or not we can double net food availability to meet food needs by 2050and still have a living planet.

“Most experts predict that the global population will exceed 9 billion by 2050…To meet the increasing needs of everyone in developing and developed countries alike, accounting for a changing climate, we will need to double net food availability…The bottom line is: Can we do this and still have a living planet?

…One of the simplest ways to increase net food availability is to reduce post-harvest and post-consumer food waste. Globally, we waste one of every three calories produced. If we could eliminate waste, we would halve the amount of new food we need to produce by 2050.”

Reducing post-harvest waste is highlighted as one simple way to increase net food availabilty; exactly what TTFF sets to accomplish with our partnership with Northwestern University. Equipment distributed as part of Factory-in-a-Box, developed by TTFF and Nortwestern’s McCormick School of Engineering, allows for up to 1,200lbs of breadfruit flour to be produced per week, preventing potential for post-harvest fruit going to waste.

Check out more of the article here. 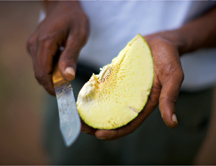 NewScientist recently got in touch with TTFF for breadfruit recipes that we could share with readers. We are thrilled to see them printed in NewScientist’s recent article,Recipes for an unexpected tropical wonder food.

Try out the recipes in your own kitchen! Breadfruit is a wonderful source of nutrition for the family:

“Breadfruit’s flavour is a bit ambiguous, but its nutritional value and potential as a worldwide staple are clear. It is high in vitamins and minerals, and has a higher proportion of essential amino acids – meaning it contains better quality protein – than soy. It’s also gluten-free, and can be ground into flour, making it the ideal substitute product for those who are gluten intolerant.”

Breadfruit demand on the rise 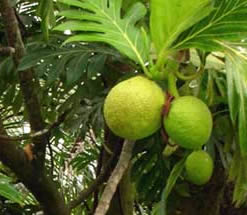 Another article stating that breadfruit demandcontinues to be on the rise:

“The CEO of a Fiji company exporting breadfruit to New Zealand says demand is increasing and Pacific businesses need to grow to meet the demand.

Michael Finau Brown was speaking at the Pacific Wave Conference in Auckland yesterday and said he was sending a clear message to growers that it’s not just the Pacific market in New Zealand, but many others who are interested in breadfruit and other crops.”

Check out the rest of the article from Radio New Zealand International here.

Posted in Blog, Breadfruit | Leave a comment | Back to top
TREES THAT FEED