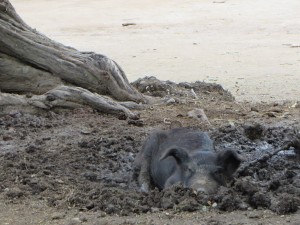 June 3rd, 2014. Nothing, except maybe a Haitian pig in mud. Why is this photo from our recent TTFF trip so important? It indicates environmental growth in Haiti. There was an unfortunate chapter in Haitian history when local Haitian pigs were almost completely eradicated. In the late 1970s, in part due to the outbreak of swine flu, there was a program to replace the local pigs with American hogs. It was a controversial program, and while partly well-intended, it hurt local Haitian farmers. Farmers had to kill off their small pigs to get the large hogs. This presented a problem: while the local Haitian pig was a smaller and hardy sort, living off of the land and eating whatever scraps were available, the American hogs needed special foods and did not tolerate the hot weather. These replacement hogs died off, leaving the farmers worse off than before. Luckily, the Haitian pigs were not completely exterminated,and now they are staging a big comeback and will benefit Haitian farmers once again. We were delighted on our recent trip to see a very happy Haitian pig in mud on a local farm in Gonaives, Haiti. Stay tuned for a more detailed report about our trip!