TTFF is very active in the Eastern Caribbean. Much more detail coming soon!  Watch this space! 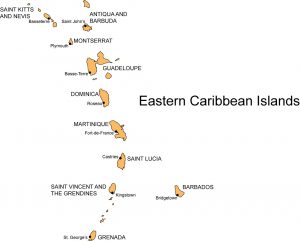 The most easterly island of the Caribbean, and one of the leading tourist destinations within the Caribbean. A population of 277,821, roughly 20% of Barbadians live in poverty, and 10% cannot meet daily food needs.

Known as the “Nature island of the Caribbean” with a population of 71,293. Agriculture used to be the predominant fuel for Dominica’s economy, predominantly producing bananas, followed by coffee, patchouli, aloe vera, cut flowers, mango, guava and papaya. The economy now relies more heavily on ecotourism.

The largest island within the United States Virgin Islands, with a population of 50,601. Sugarcane production historically ran the economy in St. Croix, and today sugarcane is being used to produce dark-style rum in St. Croix.

A population of 130,000 people the main agricultural crops for production are cassava, eddoe, dasheen yam and sweet potato.

Puerto Rico consists of a main island and smaller neighboring islands with a total population of  3,285,874. Manufacturing and tourism largely contribute to Puerto Rico’s economy.

Breadfruit updates in these regions as well as Trinidad & Tobago coming soon!