Haiti, Gateway to the Caribbean, has a colorful history.  Columbus named the island Hispaniola and claimed it for Spain in 1492.  Haiti occupies only the smaller western 3/8 of the island, while the Dominican Republic is the larger nation to the east.  In 1625 competing claims and settlements ceded the western portion of Hispaniola (Haiti) to France.  Conquerors grew sugar cane, tobacco, and cotton on plantations worked by slaves.  It also became a haven for pirates.

In 1804 slaves and free people of color revolted.  Slavery was abolished, and Haiti became 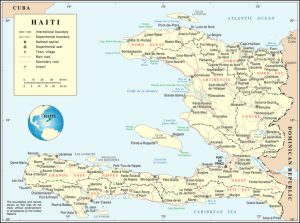 Today Haiti is the third most populous country in the Caribbean with 10,604,000 people – 95% black, 5% mulatto – living in 10,714 square miles.  The official language is French and Haitian Creole.  The capital, Port-au-Prince, is located on the coast in the center of the horseshoe peninsula.  Haiti is the most mountainous nation in the Caribbean with rugged mountains interspersed with coastal plains and river valleys.  The tropical climate is challenged by periodic droughts and floods as well as hurricanes.  Deforestation has heightened the effects of these challenges.  Soil erosion and deforestation cause severe flooding.  Fifty years ago forests covered 60% of Haiti – today less than 1% remains forested.

Civil unrest, poverty, corruption, poor infrastructure, poor healthcare, and lack of education stand in the way of economic growth in Haiti’s free market economy.  It is the poorest country in the western hemisphere.  Half the population lives on $2.00 a day.

Despite natural disasters (earthquake, hurricanes) we are optimistic.  The people of Haiti are resilient.  Working with local groups, Trees That Feed Foundation has planted over 30,000 trees to date in Haiti.  We are grateful for excellent working partnerships with Three Angels Children’s Relief Foundation, Haitian Connection, Smallholder Farmers Alliance, Floresta Ayiti, and Immaculate Concepcion Parish in Galette-Chambon.